Install Or A Tragedy Can Happen

Whether we are talking about a home, business or other organisation a smoke alarm is one of the most important devices that need to be installed in a building. It could literally be the difference between life and death.

Although fires are thankfully rare in most areas, it is important that everything is set up if one does occur, in a way that would greatly increase the chance of everyone getting out unharmed. Having smoke alarms will contribute to this in a big way. And remember it is not just about protection from the actual flame itself, in a fire deadly gas often spreads farther and faster than the heat does.

Sadly, a lot of people that have died in a fire have done so because they were not aware the building was burning until it was too late. With a smoke detector, occupants can be made aware of what is happening thanks to the smoke alarm beeping. As soon as a smoke alarm detects smoke it sounds a shrill alarm to alert all those nearby. This head start could be the difference between survival or death.

A properly installed smoke alarm that is maintained correctly is one of the best ways to provide an earlier warning of a fire. Before it gets much worse and becomes much harder for anyone trapped to escape. 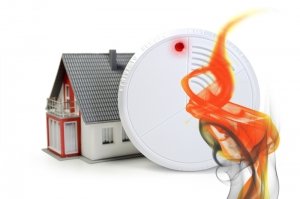 Remember that just like a TV aerial installation, for example, you can call in professionals to have your smoke alarms installed. If you are moving into a new home, for example, make sure any existing smoke detectors are working and that they are fitted with fully working batteries. If you find there are no smoke alarms do not hesitate to get some installed. The same goes for any other building, including business headquarters.

It does not matter if you work in a shop or an office or anywhere else. Whatever building type, there needs to be fully working and maintained smoke detectors. Remember it is not just about the protection of staff but also any customers and other visitors who may be in the building.

You should place a few smoke detectors throughout the building. This way you increase the chances of it being effective. When looking at what type of smoke alarm to purchase it is good to know the two main types. The two most common options are photoelectric and ionisation detectors.

Photoelectric detectors use a beam of light inside the detector to sense if any smoke is in the air. If there isn’t, the beam will shoot in a straight line. However, if smoke is detected, the light will scatter, and the alarm will go off. Ionisation detectors work with a chamber that has a small electrical current. If smoke was to enter the chamber and the level of ions in the air changes, the electrical current drops causing the alarm to sound.

So, after reading the different types of smoke alarms, you may wonder which is the best choice. The recommendation is to have one of each type on each floor of a building and to try to place them in particular in high-risk areas. Such as the kitchen or near heating appliances.

Please do take the idea of having smoke alarms installed very seriously. And remember to check the batteries often. To further help maintain them and keep them in peak working order you should vacuum a smoke alarm at least every six months to remove any dust or cobwebs that have built up. But make sure to use a soft brush attachment around the vents as well as along them.

If you would like to speak to a professional about installing a smoke alarm, then please get in touch today on 01604 981252. Alternatively, fill in our enquiry form.

This site uses cookies. By continuing to browse the site, you are agreeing to our use of cookies.

We may request cookies to be set on your device. We use cookies to let us know when you visit our websites, how you interact with us, to enrich your user experience, and to customize your relationship with our website.

Click on the different category headings to find out more. You can also change some of your preferences. Note that blocking some types of cookies may impact your experience on our websites and the services we are able to offer.

These cookies are strictly necessary to provide you with services available through our website and to use some of its features.

Because these cookies are strictly necessary to deliver the website, refuseing them will have impact how our site functions. You always can block or delete cookies by changing your browser settings and force blocking all cookies on this website. But this will always prompt you to accept/refuse cookies when revisiting our site.

We fully respect if you want to refuse cookies but to avoid asking you again and again kindly allow us to store a cookie for that. You are free to opt out any time or opt in for other cookies to get a better experience. If you refuse cookies we will remove all set cookies in our domain.

We provide you with a list of stored cookies on your computer in our domain so you can check what we stored. Due to security reasons we are not able to show or modify cookies from other domains. You can check these in your browser security settings.

These cookies collect information that is used either in aggregate form to help us understand how our website is being used or how effective our marketing campaigns are, or to help us customize our website and application for you in order to enhance your experience.

If you do not want that we track your visit to our site you can disable tracking in your browser here:

We also use different external services like Google Webfonts, Google Maps, and external Video providers. Since these providers may collect personal data like your IP address we allow you to block them here. Please be aware that this might heavily reduce the functionality and appearance of our site. Changes will take effect once you reload the page.

The following cookies are also needed - You can choose if you want to allow them: